1. Mount Everest Base Camp  - Highest Mountain in the World

Mt Everest was first climbed by Sir Edmund Hillary and Tenzing Norgay in the year 1953 from the Nepal side. There is two possible way to climb Mt Everest; one is from the southeast of Nepal which is the standard route and another is north of Tibet side.  To this great massif, Lhotse is also connected to the southeast side. Most of the mountaineers use the standard route to climb Mt Everest. Climbing Mt Everest is not an easy task, it requires hard dedication and a strong will to conquer the top of the world. The extreme pleasure of being at the top of the world is hard to describe in the world. For that one have to be at the topmost part of the world.

Mount Kanchenjunga is the third highest mountain peak in the world. It has an elevation of 8,586 m in a section of the Himalayas called the Kangchenjunga mountain range delimited in the west by the   Tamur River, in the north by Jongsang La, and the Nepal-China border. Kanchenjunga Main is on the border of Phaktanglung and Sirijanga rural municipality in Taplejung district and India. Kanchenjunga Main is 1.1 km east southeast of Yalung Khang and 0.8 km north northwest of Kanchenjunga Central. Until 1852, Kangchenjunga was assumed to be the highest mountain in the world, but calculations based on various readings and measurements made by the  Great Trigonometrical Survey of India in 1849 came to the conclusion that  Mount Everest, known as Peak XV at that time, was the highest. Allowing for further verification of all calculations, it was officially announced in 1856 that Kangchenjunga was the third highest mountain in the world. Kangchenjunga was first successfully climbed on 25 May 1955 by Joe Brown and George Band, who were part of a British expedition.

Soaring with an altitude of 8,516m, Lhotse is the fourth highest mountain in the world. Lhotse means South peak in Tibetan and this peak is connected to Mt Everest via South col. Apart from the main peak, there are smaller peaks; Lhotse middle (8,414m) and Lhotse Shar (8,383m). The route to the top of the summit is similar to camp 4 of the Everest Expedition and onwards it gets steepened sharply with the icy gully. And the view from the summit is worth investing millions of dollars.

Lhotse lies between the border of Nepal and Tibet in the Khumbu region of Nepal. Because of its connectivity with Everest sometimes it is considered part of Everest massifs. The main summit was first climbed by the Swiss team of Ernst Reiss and Fritz Luchsinger in the year 1956.

Makalu, is the 5th highest mountain in the world soaring at an altitude of 8485m from the sea level. It is situated in the Mahalangur range to the southeast of Mt Everest in between the border of Nepal and Tibet (China). This eight-thousander is a pyramid-shaped mountain completely isolated from the other peaks. The peculiar character of this mountain is that there are 2 notable subsidiary peaks called Kangchungtse (Makalu II) and Chomo Lonzo. Kangchungtse lies 3km north-northwest and Chomo Lonzo lies 5km north-northeast of the main summit.

The mighty Makalu was summited by the French expedition team in 1955. Among other mountains, this mountain is considered difficult to summit. This is because of the steep pitches and rocky ridges. The final ascent is full of technical ice/rock climbing. So, the successful ascent is less heard about the great massif, Makalu.

Cho Oyu is the sixth highest mountain in the world. The elevation of the beautiful mountain is 8188m from the sea level. The Cho Oyu in the Tibetan language means “Turquoise Goddess”. The mountain lies 20 km west of Mt Everest and is the westernmost major peak in the Khumbu region.

To the west of this mountain, there is a pass that divides Khumbu and Rolwaling Himaya. The same glaciated pass is the main trading route between Tibetan and Khumbu Sherpas. Among other eight-thousanders, this mountain is the easiest to climb due to its proximity to the pass and moderate slopes of the standard northwest ridge route with the short and direct route and less technical sections. This is the reason, many mountaineers climb this mountain before they climb Mt Everest. Cho Oyu is taken as the stepping stone to summit Mt Everest. The first successful ascent to the summit of Cho Oyu was done in the year 1954 by the Austrian Expedition which includes Herbert Tichy, Joseph Jöchler, and Sherpa Pasang Dawa Lama. They summited the mountain from the standard northwest ridge route.

Mt Dhaulagiri is the 7th highest mountain peak in the world and the 5th highest in Nepal with its height of 8,167m. Its name is derived from the Sanskrit word ‘Dhavala’ which literally means white and ‘Giri’ Referring Mountain. It lays to the northwest of Pokhara and to the east of the Annapurna Himalayas range. Normally, to do an expedition to Mt. Dhaulagiri, four camps will be set up Camp I 5,900m. On the Col, Camp II at 6,400m, Camp III at 7,200m, and Camp IV at 7,500m. The climbing of this section is considered the most difficult in the expedition.   Mt. Dhaulagiri is one of the most formidable peaks to climb with the first successful summit only in 1960 by the Swiss following from the Northeast Ridge. Mt. Dhaulagiri is also the highest point of the Gandaki River Basin. The Annapurna I, which is 34Km east of Dhaulagiri I, in between these two giants a gorge is formed, known as Kaligandaki Gorge, This gorge is the deepest gorge in the world and the Kaligandaki River flows in this gorge.

Manaslu, the 8th highest mountain in the world soaring above 8163m. Mt Manaslu is also called Kuang and lies in the Mansiri Himal which is the west-central part of Nepal. Manaslu word is taken from the Sanskrit word Manasa which means “intellect or soul” and this massif was named as “mountain of the spirit”. This is the highest peak in Gorkha district and is just 64 km from Annapurna

The first climb to this mountain was done in the year 1956 by the Japanese Expedition which includes Toshio Imanishi and Gyalzen Norbu. Considering the first successful expedition done by the Japanese tea, they take Mt Manaslu as their own as the British took Mt Everest. The Manaslu circuit trekking route was opened by the government in 1991 and the trail trek passes through the highest pass called Larkya Pass (5106m). We can observe 10 peaks over 6500m and some peaks above 7500m during this legendary trek.

Annapurna I is the 10th highest mountain in the world. The height of this mountain is 8091m from the sea level. Annapurna I is one of the highest mountains from Annapurna Massif, which includes 1 over 8000m peak, 13 over 7000m peaks, and 16 over 6000m peaks. This Annapurna Massif is bounded by Kali Gandaki Gorge in the west, Marsyandi River in the north & east, and Pokhara valley in the south. The great massif is under the protection of the Annapurna Conservation Area Project (ACAP)

Annapurna I is the first eight-thousander to be summited. It was summited in the year 1950, French Expedition led by Maurice Herzog. Since then many attempts have been done and some of them led to failure. Due to the great fatality rate, while climbing, this mountain is considered one of the most dangerous mountains among the other 14 eight-thousanders.

Autom & Spring is the Best Time for This helicopter tour but we can organize through Year.

We will provide the Price on request, contact us

Pickup from Airport, Transfer to Hotel, check-in & Preparation for the Next day's Trips. Evening Brief Meeting about our Tour & Schedule by Our Tour Manager or expert.

Early Morning takes Packed breakfast then drive to Airport, Process to Check-in & fly to Kanchanjunga Base Camp, With Great Mountain Views - landed at Kanchanjunga Base Camp for 15/20 minutes, fly back to Everest region Explore the Lhotse Base camp, Makalu Base Camp, Cho Oyu Base camp & Finally Everest Base camp ( Kalapathar) with landing at all the places. Lunch at Everest View Hotel & Fly back to Kathmandu, Transfer to hotel & Rest Day overnight at hotel

Morning breakfast then drive to Airport & start the remaining Adventure with Helicopter fly to Manaslu base camp, Landed & Manaslu base camp, after that fly to Annapurna region, Landed at Annapurna base camp for half hours, lunch & fly to Dhaulagiri Base camp, Enjoy the Mountain view & lifetime experience - fly back to Kathmandu

Morning Breakfast then frees till departure, transfer to airport & fly back to the country with a lifetime experience of Himalays. 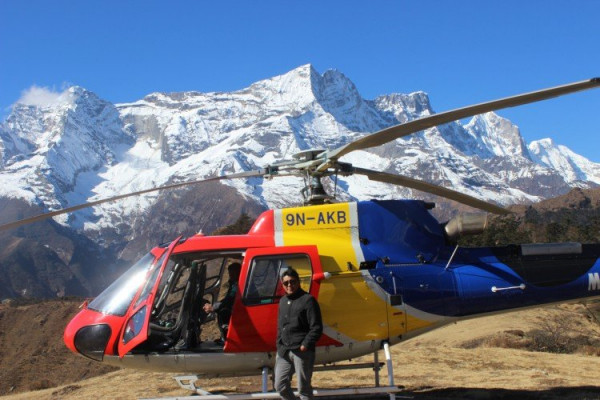 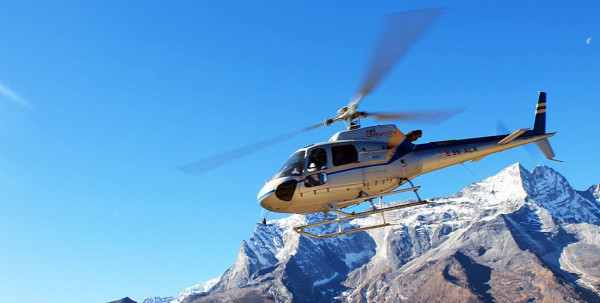 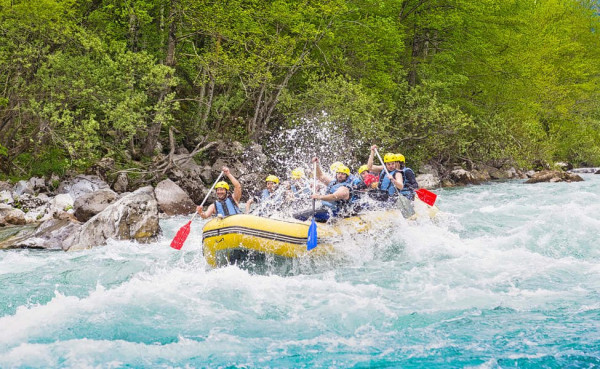 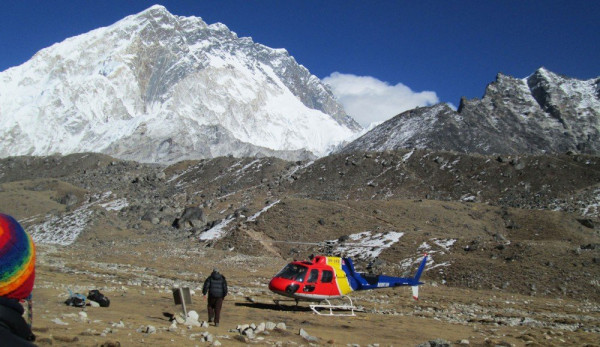